I'm early for the bus for a change. The conductor this week is none other than the Totalfeckineejit himself! TFE, as he is affectionately known by his acolytes, is the founder of the Poetry Bus line and editor of The Poetry Bus Magazine. As bus driver this week, he challenges us to write a fourteen line poem about one of four pictures or a song (here). Join us for a rollicking ride! 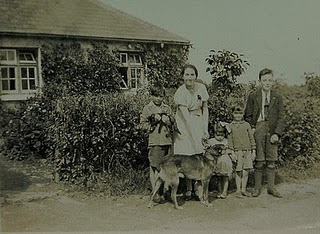 Sundays, we pose outside the gate,
facing the light in best dress,
three in knee pants, one in bows,
standing with our mother
and the dogs and cats du jour
or with the heavy aunts,
the card-playing sisters
who laugh throaty laughs
and smoke forbidden fags.
Dutifully, we squint
at the father husband brother
behind the black box
who waits for the light to be just right,
who will become for us a shadow on the ground.
Posted by Karen at 9:41 PM 19 comments:

*On the Birthday of John Keats

Finally! I've been on something of a dry spell lately, but thinking about one of my favorite poets has inspired this little piece. This is also my ticket onto the Poetry Bus, where 120 Socks has given some excellent prompts, including the one I chose -- "amber." You can read other bus poets here. 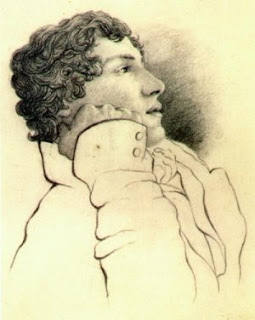 ON THE BIRTHDAY OF JOHN KEATS


* Today is actually the anniversary of Keats' death, but I like the title, and so I'll keep it. Maybe I'll post this again next Halloween, the actual birthday of John Keats. (Thanks to my daughter with the Ph.D. in English Literature for setting me straight. I knew there was some reason I had Keats on my mind...now, I'm thinking that death is a birth of sorts, so maybe I wasn't far off!)
Posted by Karen at 6:07 AM 11 comments:

On the way to work today,
I passed the same old man
tugging at the same old shaggy mule,
only today, a small knot of watchers
puffed in the February air.
The crust of snow still hugged the pond
and the mud was frozen hard,
except for where the mule moved forth and back
like some clumsy dancer learning his steps.

The old man tugged and tugged,
then got behind to push.
The watchers swiveled hatted heads
like spectators at a game:
Front, then back, then front again,
but the creature held his place;
only the old man moved.
From my car, I watched the watchers
turn to one another in disgust
as if they had bet on the old man to win.

I wonder, what was the point of all this fuss?
Yesterday it was the same, and so the day before.
For days, the mule has stood his frozen ground,
the old man has tugged and pushed,
and I have gawked in my slowing car
as I pass on my way to school.
Today, a knot of men stamped the ground
and blew on frozen hands and watched.

What is it they had come to see --
the man, the mule, or the match?
Tomorrow, will the masses grow?
Will the mayor come along?
Will he bring a marching band?
Will reporters flood the field with artificial light?
On the news, will the old man spit and chew
and, toothless, talk about  the "dangedest
stubborn mule he ever seen" ?
Will the watchers place their bets,
and will I pass on by --
or tomorrow, will I stop?
Will I join the frosty group
as we stamp our frozen feet
and stubbornly resist the ropes
that tug us daily in an inexorable attempt
to move us from the frozen mud?
Posted by Karen at 11:48 PM 19 comments:

Three tablets side by side.
Or do they form a ladder each to each?
And is the top too high for me to reach?
How shall I on these tablets write my name?

Man
With who and what I am?
With what I do for them?
With the loves that I will leave?
With the losses they will grieve,
Or with fellows I forsake?

Earth
With deeds that I have done?
With the battles I have won?
With the promises I keep?
With furrows long and deep,
Or with scratches left in dust?

Three tablets side by side
Or laddered each to each.

How will I there inscribe?
How will I span the breach?
Posted by Karen at 5:38 PM 16 comments: