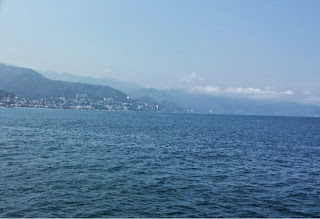 Blue as the sea, Sierra Madres rim Bandaras, bay of flags.
Mist bruises the mountains not yet burned by sun.
Time for us to go, even though the colors hold like glue;
magnolias and wild flowers beckon.
One more day, you sing.
One day more I sing in chorus.

In days, the sea will be a spectre,
pirated colored glass the only reminder of paradise,
fossil, flesh, and sand.

How to Read a Poem

What I want to say is
you can't rinse and stack a poem.
You have to let your hands
slip across the page.
Wrap the rhythm round your fist
and plunge into the lines.
Turn the words until the stains
of last night's tea are gone.
Get between the tines.
Feel the sharp knives inside the soapy sea.
Wash, rinse, and hold it to the light.
Let it shine like finest crystal.
I want to say
a poem must be scrubbed
before you place it on the shelf
like last night's news.
Rub it. Read it clean;
Read it, feel it, repeat.
Posted by Karen at 5:25 PM 16 comments: 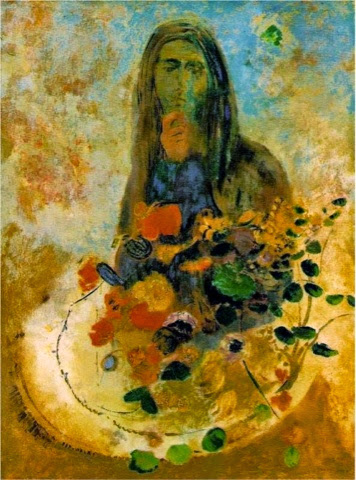 This poem was written after one glance at Odilon Redon's "Mystery" and as part of the IGRT challenge by Hedgewitch to write an ekphrastic poem on one of Redon's works. The lamb in the poem is from both the painting and an experience shared with a dying loved-one who asked, "Who is that man over there?" When asked what man she meant, she pointed to blank space and said that man with the sheep." She was a lifelong Catholic. She "should have" seen a man with a glowing heart. She saw lambs. Mystery.
Mystery
the final mystery
hanging on the wall
a man
a lamb
a cup
a man with a lamb in his hands
a man cradling a cup
like Lazarus, a man raised up
around my neck
upon my wall
that man
that plan
that mystery
Posted by Karen at 6:13 AM 15 comments:

What the Net Holds 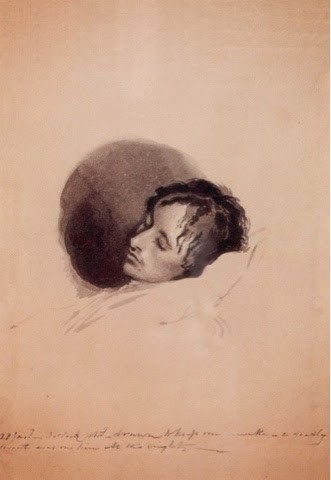 “the tongues of dying men /
enforce attention like deep harmony.”
—W. S. Shakespeare
One final time, we wait
for you to speak the truth
we know you knew.
Your dry tongue clicks,
lips like gaping fish.
Not air you strain
from or to, but the wish
to speak of beauty, harmony,
and truth. Too late.
We come too late in the day
for you to say, and yet we stay
suspended in the possibility
that the air we breathe
has molecules of you
dissolved and thrown
against the deeply mortal reef.
When finally we leave,
our nets are filled, heavy with
the poetry we seek.
Posted by Karen at 9:00 PM 7 comments: 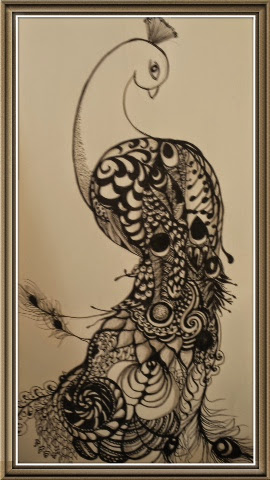 In mythology, the story of Zeus, Hera, Io, and Argus is a tale of lust, trickery, death, and honor.  In brief, jealous Hera turned Zeus's lover Io into a white heifer and set the hundred-eyed watchman Argus to guard her. Hermes, a god known for trickery, lulled Argus to sleep by playing music on a reed and by telling monotonous tales. Zeus was able to recover Io, and Hera placed a hundred eyes in the tail of her favorite bird in tribute to Argus.

This tale of the tail is written for the April 1 d'Verse prompt to write about an animal. That's my recently created artwork up there, so I have peacocks on my mind (obviously). Why? I don't know. Why not?

One hundred eyes to guard the prize,
But every eye did close.

As Argus fell to Hermes' spell
That lulled him to repose;

And Zeus did laugh to take the calf,
Sweet Io, from his queen;

The watchman gave his life to save
Hera's pride supreme.

And Hera, moved by gratitude,
Although the fight she lost,

Placed the eyes to memorialize
Poor Argus and the cost.

The peacock's fan, to modern man,
A thing of rare beauty;

In ancient days, a tribute made
To eyes that no more see.