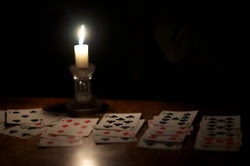 
The power has been out here
Twice already.

I know I should be writing
While there's light.

I know I should be writing.
I never find the time to,

But still, I waste
A solitary night.

I turn the cards and shuffle,
Smack them down while thinking,

I know I should be writing
While there's time.

When Grandma lay here dying,
I used to hear her playing,

Shuffling through the night
Until she'd gone.

I know I should be writing.
I harbor no illusions;

I shuffle, and I play
This game alone.

And you, Dear Reader, shimmer,
Figment of my Fancy,

You shake your head
At each cliche I own.

I harbor no illusions,
That my words somehow matter,

Witness to things
I think or feel.

Solitary writer,
I sit here in the darkness.

False faces,
they called them
when I was a child --
the masks we wore
for trick-or-treat.

I picture still
the piggy face,
my silky hair
appropriately,
in pigtails.

That was it;
that was my disguise.

If that was me,
that anthropomorphic thing,
I don't recall the choice --
choosing for myself
to be a happy little pig.

Perhaps I did,
but that's the thing
about memory --
it makes false faces
of the past.

I don't recall a voice
back then,
but that is not to say
I wouldn't, if asked today,
disguise myself
exactly that same way.


- Posted using BlogPress from my iPhone
Posted by Karen at 7:01 PM 3 comments: 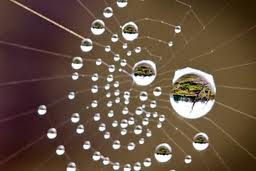 I can't believe
How unobservant
You are,
He says.

The sky this morning
Rolls blue and grey
Except where the sun should rise,
Except where striations
Of purple, gold, and pink
Mute the light.

How could you
Not have noticed
That before,
He asks of something
So useful I cannot even see.

Meanwhile,
A tiny spider bounces
The tightrope of his web
And hangs a moment upside down
To shinny past
A shining drop of dew.

You never pay attention,
He says.

To see the world in a grain of sand,
I tell him.

Meanwhile, the earth ticks
And spins around us
And holds eternity
In a web of many hues.

Chris of Enchanted Oak is setting the pot to boil for making jam with a few choice words. Here's my contribution to the kettle:

Round the edges of my mind,
These ghosts:

All those uncles in undershirts
Drinking and laughing,
Then Mama wringing
Laundry out by hand.


- Posted using BlogPress from my iPhone

No vamos a ceder frente a los terroristas

I must have mice on the brain! In nearly 30 years of living in the country, I've had only one mouse in my house, and that was this week when a tiny fieldmouse ran in an open door. It was a standoff, but it was he, honestly, who left through the open door. Whew!

PS - if you don't believe me, I have a witness.

No vamos a ceder frente a los terroristas

It was a standoff
Of the rodent kind -
Raton de campo,
No bigger than my thumb,
Un bandido pequeno
With a tail like a sword,
And me, Señora de la Casa,
All giant legs and feet,
Like some towering statue,
More frightened, I am sure,
Than he.

What great cause
Has spurred this raid?
What urged this terrorista to scale
The steps and sneak inside?

I see his mousey compadres
Gathered round, toasting
And telling him heroic tales,
Tempting him with grain to be found
Inside the citadel.

So here he is,
Come in through an open door,
Looking at me like he's never
Seen a broom before,
And I, conceding defeat
To such a sight,
Open up the other door
And flee in fright.


Forgive my fractured Spanish. I studied French, but somehow, this little guy was a bandido!

- Posted using BlogPress from my iPhone

Billy nearly made us miss the famous Willow Manor Ball. Seems he's after those mice again!

Somewhere in the house
He is chasing a blind mouse
With a carving knife.

He'll mince it into words
And the pauses he has heard
In his head.

The caesuras, he would say
In his professeuric way,
Tell us how it should be read.

Still, he's flying round the room,
Chasing mice without a broom
Trading verses with the dead

Till he leaves this worthy cause,
Takes a breath and takes a pause,

Fills the silences we've heard
With a poet's every word. 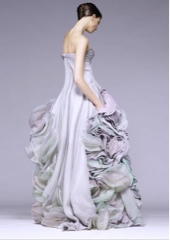 This is for this week's Poetry Jam prompt to write a love poem.

You have slipped
between the creases

in my brain.
Most days,

just you,
and the everyday things

you would do
everywhere,

the signs unseen
by anyone but me.

But today,
just the closing

of a door,
and you are


- Posted using BlogPress from my iPhone


You can't be
on the fence
with Jesus;


you gotta stand
on either side.
It's either/or;
it's neither/nor.


It's cherubs
on the ceiling,
or it's fire
beneath your feet.


It's morning's
shining glories,
or it's nightshade's
deadly vines.


don't stay,
you tumble
either way. 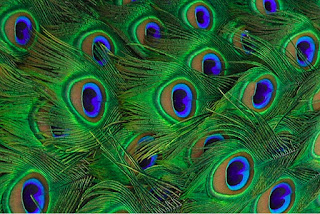 The Poetry Jam asks that we write about something that we once thought was a flaw but have come to understand as an asset. When I was younger, I hated that I was cursed with the ability to see all sides of an issue. I felt wishy-washy and weak. Today, I recognize my ability as an asset in working with people and mediating problems.
I grew to trust my inner sight and understand that as long as I am true to myself, "I cannot then be false to any man."

Argus had them,
Unblinking
Wakeful watch.

I pluck them,
Lull them,
Scratch them out,

For only two,
Can move
In straight Lines.

These many eyes,
Plot all
The ground around.