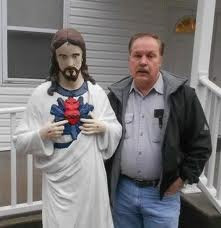 This excerpted from local TV news:

There's outrage and sadness in one local community after an act of vandalism on a sacred symbol -- a Jesus statue that was shot.

They're asking, "Who shot Jesus?"

“My grandchild ran in and said, ’Someone shot Jesus in the head,' ” Pastor Bobby Adkins said.

Someone drove by the Lundale Freewill Baptist Church in Logan County and shot the church's Jesus statue nearly between the eyes."

Not much to do in the hollers (yes, hollers) of West Virginia, I guess. Me, well, I'm doing something much more productive. I've been attempting Grace's challenge at Imaginary Garden with Real Toads to write a Tanaga,

A tanaga is a short poem of four lines, each line seven syllables with a single rhyme. Today, other rhyme schemes are used, including freestyle rhyme, but for the purpose of this exercise, let's try to stick with couplets.

So, here's our form:

The tanaga is traditionally presented without a title, has an extreme reliance on metaphor, should be emotionally charged and ask a question that begs an answer.
You can see other tanagas here: http://withrealtoads.blogspot.com/2012/01/tuloy-po-kayo.html

Here's mine, inspired by Who Shot Jesus?


Who shot plastic Jesus' head?
Don't they know that plastic's dead?
If that's true, then why the start
Of extra bloodflow from his heart?
Posted by Karen at 6:14 AM