So, this is not a  poem, but when Dominic, Poetry Bus Driver Extraordinaire, asked that we write a poem on something (literally), this came to mine. As I said, it is not a poem, but it's the germ of one. It was percolating in my mind while I was in the shower one morning, and I had to get it down before it flew from my mind, as so many of my ideas seem to do. Achoo, and they're gone, floating around wherever lost poems go. So this is not a poem, but it's an idea for one, written with eyeliner before it flew away. Don't worry if you can't read it. It came to nothing and ended up being wiped into oblivion anyway. 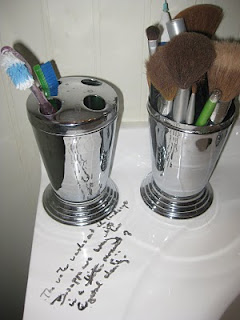 You can find other poems written on objects such as bananas, rocks, coffee cups -- here.
Posted by Karen at 6:32 AM