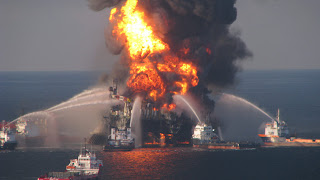 On April 5, 2010, an explosion at Massey Energy's Upper Big Branch Mine trapped and killed twenty-nine coal miners inside a mountain in my home state of West Virginia. On April 20, 2010, a British Petroleum explosion in the Gulf of Mexico triggered a spill of up to 19,000 gallons of oil a day, one of the most devastating man-made disasters of our time which continues to this day. In my mind, the two disasters are inextricably linked. Sometimes I just do not understand what we are doing to ourselves and our world.

In the hills of
we thirst for living water,


so we go on Sundays
at morning and at night,


and on Wednesdays, too,
we go, looking for a well

that isn't poisoned by
the runoff of our sins.


Someone said the Gulf
where fishes used to leap


is sacred, dead sea water,
but with men holed up


we can't imagine baptizing
ourselves in oil and gas and brine.


So we settle for a sprinkle
from polluted heaven’s springs


and mourn the lost that failed to flee